He fleeces you of your rights with a relish, but is shocked if you work bareheaded in summer, or in winter without warm stockings. He can make you go without your liberty , but never without a shirt. He can strip you of all protection and thus expose you to all outrages, but if you are exposed to the weather , half clad and half sheltered, how yearn his tender bowels!

But there is no end to these absurdities. Are slaveholders dunces, or do they take all the rest of the world to be, that they think to bandage our eyes with such thin gauzes? Protesting their kind regard for those whom they hourly plunder of all they have and all they get! Plunderers of their liberty, yet the careful suppliers of their wants?


Robbers of their earnings, yet watchful sentinels round their interests, and kind providers of their comforts? Filching all their time, yet granting generous donations for rest and sleep? Stealing the use of their muscles, yet thoughtful of their ease? Putting them under drivers , yet careful that they are not hard-pushed?

Too humane forsooth to stint the stomachs of their slaves, yet force their minds to starve, and brandish over them pains and penalties, if they dare to reach forth for the smallest crumb of knowledge, even a letter of the alphabet! It is no marvel that slaveholders are always talking of their kind treatment of their slaves.

The only marvel is, that men of sense can be gulled by such professions. Despots always insist that they are merciful. When did not vice lay claim to those virtues which are the opposites of its habitual crimes? The guilty, according to their own showing, are always innocent, and cowards brave, and drunkards sober, and harlots chaste, and pickpockets honest to a fault.

Everybody understands this. When a man's tongue grows thick, and he begins to hiccough and walk cross-leggcd, we expect him, as a matter of course, to protest that he is not drunk; so when a man is always singing the praises of his own honesty, we instinctively watch his movements and look out for our pocket-books.

Whoever is simple enough to be hoaxed by such professions, should never be trusted in the streets without somebody to take care of him. Human nature works out in slave-holders just as it does in other men, and in American slaveholders just as in English, French, Turkish, Algerine, Roman and Grecian. The Spartans boasted of their kindness to their slaves, while they whipped them to death by thousands at the altars of their gods. The Romans lauded their own mild treatment of their bondmen, while they branded their names on their flesh with hot irons, and when old, threw them into their fish ponds, or like Cato "the Just ," starved them to death.

It is the boast of the Turks that they treat their slaves as though they were their children, yet their common name for them is "dogs," and for the merest trifles, their feet are bastinadoed to a jelly, or their heads clipped off with the scimetar.

Catalog Record: American slavery, as it is : testimony of a | HathiTrust Digital Library

The Portuguese pride themselves on their gentle bearing toward their slaves, yet the streets of Rio Janeiro are filled with naked men and women yoked in pairs to carts and wagons, and whipped by drivers like beasts of burden. Slaveholders, the world over, have sung the praises of their tender mercies towards their slaves. Even the wretches that plied the African slave trade, tried to rebut Clarkson's proofs of their cruelties, by speeches, affidavits, and published pamphlets, setting forth the accommodations of the " middle passage," and their kind attentions to the comfort of those whom they had stolen from their homes, and kept stowed away under hatches, during a voyage of four thousand miles.

So, according to the testimony of the autocrat of the Russias, he exercises great clemency towards the Poles, though he exiles them by thousands to the snows of Siberia, and tramples them down by millions, at home. While they were yoking the enslaved natives like beasts to the draught, working them to death by thousands in their mines, hunting them with bloodhounds, torturing them on racks, and broiling them on beds of coals, their representations to the mother country teemed with eulogies of their parental sway!

The bloody atrocities of Philip II.

Who disbelieves or doubts them? And yet his courtiers magnified his virtues and chanted his clemency and his mercy, while the wail of a million victims, smitten down by a tempest of fire and slaughter let loose at his bidding, rose above the Te Deums that thundered from all Spain's cathedrals. All these things and more, and worse, we shall prove. Mark these words, and read on; we will establish all these facts by the testimony of scores and hundreds of eye witnessses, by the testimony of slaveholders in all parts of the slave states, by slaveholding members of Congress and of state legislatures, by ambassadors to foreign courts, by judges, by doctors of divinity, and clergymen of all denominations, by merchants, mechanics, lawyers and physicians, by presidents and professors in colleges and professional seminaries, by planters, overseers and drivers.

We shall show, not merely that such deeds are committed, but that they are frequent; not done in corners, but before the sun; not in one of the slave states, but in all of them; not perpetrated by brutal overseers and drivers merely, but by magistrates, by legislators, by professors of religion, by preachers of the gospel, by governors of states, by "gentlemen of property and standing," and by delicate females moving in the "highest circles of society.

We know, too, the threadbare sophistries by which slaveholders and their apologists seek to evade such testimony. If they admit that such deeds are committed, they tell us that they are exceedingly rare, and therefore furnish no grounds for judging of the general treatment of slaves; that occasionally a brutal wretch in the free states barbarously butchers his wife, but that no one thinks of inferring from that, the general treatment of wives at the North and West.

They tell us, also, that the slaveholders of the South are proverbially hospitable, kind, and generous, and it is incredible that they can perpetrate such enormities upon human beings; further, that it is absurd to suppose that they would thus injure their own property, that self interest would prompt them to treat their slaves with kindness, as none but fools and madmen wantonly destroy their own property; further, that Northern visitors at the South come back testifying to the kind treatment of the slaves, and that the slaves themselves corroborate such representations.

All these pleas, and scores of others, are bruited in every corner of the free States; and who that hath eyes to see, has not sickened at the blindness that saw not, at the palsy of heart that felt not, or at the cowardice and sycophancy that dared not expose such shallow fallacies. We are not to be turned from our purpose by such vapid babblings. In their appropriate places, we propose to consider these objections and various others, and to show their emptiness and folly. The foregoing declarations touching the inflictions upon slaves, are not haphazard assertions, nor the exaggerations of fiction conjured up to carry a point; nor are they the rhapsodies of enthusiasm, nor crude conclusions, jumped at by hasty and imperfect investigation, nor the aimless outpourings either of sympathy or poetry; but they are proclamations of deliberate, well-weighed convictions, produced by accumulations of proof, by affirmations and affidavits, by writ- ten testimonies and statements of a cloud of witnesses who speak what they know and testify what they have seen, and all these impregnably fortified by proofs innumerable, in the relation of the slaveholder to his slave, the nature of arbitrary power, and the nature and history of man.

Of the witnesses whose testimony is embodied in the following pages, a majority are slaveholders, many of the remainder have been slaveholders, but now reside in free States. Another class whose testimony will be given, consists of those who have furnished the results of their own observation during periods of residence and travel in the slave States. In the next place, to give the reader as clear and definite a view of the actual condition of slaves as possible, we propose to make specific points, to pass in review the various particulars in the slaves' condition, simply presenting sufficient testimony under each head to settle the question in every candid mind.

The examination will be conducted by stating distinct propositions. Between the larger divisions of the work, brief personal narratives will be inserted, containing a mass of facts and testimony, both general and specific. Most of the facts related by Mr. Caulkins fell under his personal observation. The air of candor and honesty that pervades the narrative, the manner in which Mr. The Committee have no personal acquaintance with Mr.

Caulkins, but they have ample testimonials from the most respectable sources; all of which represent him to be a man whose long established character for sterling integrity, sound moral principle and piety, have secured for him the uniform respect and confidence of those who know him. Without further preface the following testimonials are submitted to the reader. Nehemiah Caulking, and have no hesitation in stating that we consider him a man of high respectability and that his character for truth and veracity is unimpeachable. OTIS A.

Perkins and Rogers are designated by their titles. All those gentlemen are citizens of Waterford, Connecticut. This may certify that Mr. Nehemiah Caulhins, of Waterford, in New London County, is a near neighbor to the subscriber, and haa been for many years.

Slavery in the U.S., by the numbers

I do consider him a man of unquestionable veracity and certify that he is so considered by people to whom he is personally known. Nehemiah Caulkins, of the town of Waterford, Ct. Dwight P. Caulkins is a member of the Baptist Church in Waterford, and in every respect a very worthy citizen. I have labored with him in tho Sabbath School, and know him to be a man of active piety.

The most entire confidence may be placed in the truth of his statements. Where he is known, no one will call them in question. Nehemiah Gaulkins resides in the town of Waterford, about six miles from this City. His opportunities to acquire exact knowledge in relation to Slavery, in that section of our country, to which his narrative is confined, have been very great.

He is a carpenter, and was employed principally on the plantations, working at his trade, being thus almost constantly in the company of the slaves as well as of their masters. His full heart readily responded to the call, [for information relative to slavery,] for, as he expressed it, he had long desired that others might know what he had seen, being confident that a general knowledge of facts as they exist, would greatly promote the overthrow of the system.

He is a man of undoubted character; and where known, his statements need no corroboration. I feel it my duty to tell some things that I know about slavery, in order, if possible, to awaken more feeling at the North in behalf of the slave. 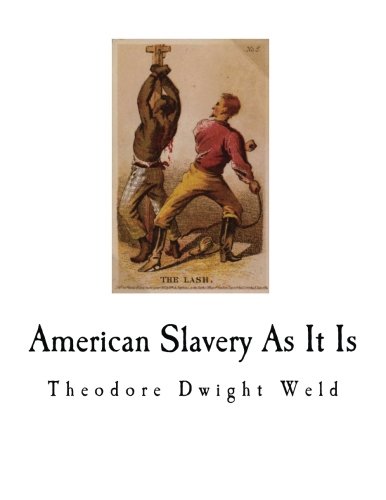 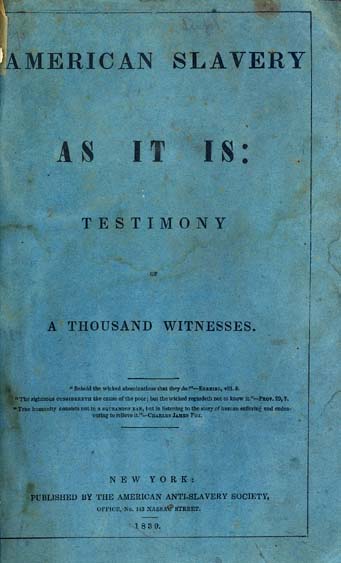 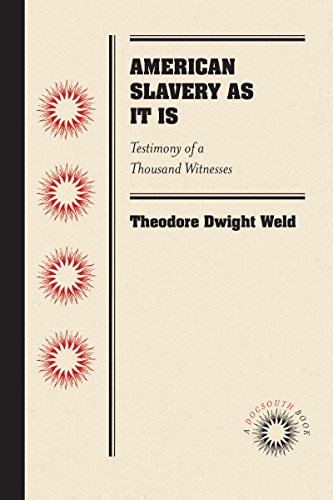 Related American Slavery As It Is: Testimony of a Thousand Witnesses